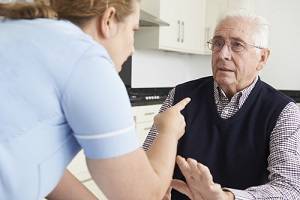 Nursing homes should be places of refuge for elderly and disabled individuals. Residents deserve to receive appropriate medical care and be treated with respect and dignity. Sadly, many nursing home residents are victims of abuse and neglect. The abuse may come from staff, visitors to the facility, or even other residents. If you have a loved one in a nursing home or assisted care facility, it is important to learn about the signs of nursing home abuse.

Some studies consider psychological abuse or emotional abuse to be the most common form of elder abuse in nursing homes. In one sad example, a 91-year-old Chicago nursing home resident was teased and taunted by staff. The staff filmed a video of themselves bullying the vulnerable woman and uploaded it to a social media app. Psychological abuse may take the form of threats, intimidation, bullying, or humiliation.

It is hard to believe anyone would intentionally injure a vulnerable nursing home resident, but physical abuse does happen in Illinois nursing homes and in nursing homes across the country. This abuse may be at the hands of staff or other residents. Hitting, pinching, grabbing, and kicking are all forms of physical abuse. Physical abuse can not only lead to physical injuries it can also leave lasting mental scars. Some signs that a resident is being physically abused include unexplained bruising and cuts as well changes in behavior or signs of fearfulness.

Sadly, some nursing home residents are victims of sexual abuse. Residents suffer from Alzheimer’s disease or dementia are often targeted by predators because they are less likely to report the abuse. Signs that a resident has been sexually assaulted include injuries around the breasts and genitals or blood in the residents underwear. Changes in behavior, child-like behaviors like thumb-sucking or rocking back and forth, fear toward certain individuals, and emotional withdrawal may be signs that a resident has been sexually abused.

Nursing home staff have a legal duty to keep residents safe. If you suspect that your loved one has been abused in a nursing home, make sure they are safe and then contact Schwartz Injury Law. Call 630-273-7330 and schedule a confidential consultation with one of our skilled Illinois personal injury attorneys today.