Are Motorists Always Liable for Bicyclist Injuries After an Accident? 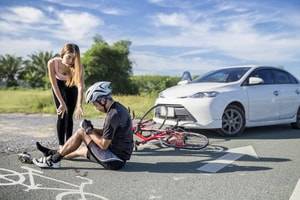 In Illinois, bicyclists are permitted to share the roads with cars as long as they abide by the rules of the road. Bicycles are considered "vehicles" when they ride on the road and must obey traffic laws in order to avoid a collision.

However, accidents can happen even if everyone involved is trying to be as safe as possible. It can happen as a result of driver distraction or ignorance of the bicyclists. Either way, Illinois is an "at-fault" state which means whoever is responsible for the accident will pay for the damages and any injuries sustained after the incident. Since bicyclists have less protection than a motorist, injuries can be catastrophic.

What is Catastrophic Injury?

An injury that is so severe that it alters a victim's way of life forever is considered "catastrophic." This can include:

Bicyclists are at risk of these types of injuries when they ride on the road because they have less protective material around them if they are hit by a car. Helmets are required in Illinois so as to avoid head injuries, but if a bicyclist is thrown from their vehicle, they can suffer road rash or broken bones from sliding across the pavement.

How is Fault Determined?

Since a bicyclist is considered a vehicle while on the road, they have just about the same rules to follow as a car or truck. They must obey the right of way rules when coming to intersections and yield to emergency vehicles. Most importantly, bicyclists must stay far over to the right side of the road at all times so as not to block faster moving traffic from overtaking them.

Motorists are able to maneuver around bicyclists safely as long as:

If a motorist tries to squeeze past a bicyclist and hits that person, the motorist is at-fault and will have to pay for damages.

Bicyclists cannot ride next to one another or ride outside of marked bicycle lanes. If they do and an accident happens, they will be considered the at-fault party.

After an accident, it can be hard to determine who made a mistake and caused the collision. The first thing to do when fighting for compensation is to hire a knowledgeable lawyer. The lawyers of Schwartz Injury Law can help guide you through the process and make sure you receive full and fair compensation. To schedule a free consultation with a DuPage County car accident lawyer, call 708-888-2160.