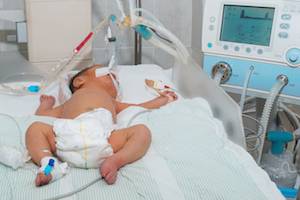 Brain Damage Due to Oxygen Deprivation in Cook County

One of the most common causes of brain-related birth injuries is delayed delivery of the baby. A baby that stays in the birth canal too long can suffer permanent brain damage due to lack of blood flow and oxygen. Oxygen deprivation can also result from umbilical cord problems or other complications during birth. The technical term for oxygen deprivation at or near the time of birth is birth asphyxia.

As a result of oxygen deprivation during birth, two to three out of every 1,000 babies born in the US are diagnosed with a condition known as hypoxic-ischemic encephalopathy (HIE). Breaking down this term: hypoxic = lack of oxygen, ischemic = restricting blood flow, and encephalopathy = affecting the brain. Children with HIE can have cognitive impairments as well as deficits in motor skills.

HIE affects as many as 12,000 newborns each year in the US. For the past decade, the standard treatment has been hypothermia (cooling) of the newborn, which has been shown to help protect the brain from long-term damage. This treatment must be started within six hours of birth in order to be effective. According to researchers, cooling therapy helps about one in seven infants with HIE.

Newer research suggests that hypothermia coupled with a hormone called erythropoietin (Epo), administered in multiple high doses during the first week of an infant’s life, may help to protect a newborn’s brain from long-term damage. The human body naturally produces Epo, a hormone that stimulates the formation of red blood cells that carry oxygen. Epo plays a role in brain development prior to birth and appears to enhance brain regeneration and repair following a brain injury. Preliminary clinical trial results released in 2017 were positive, and a large clinical trial to test the neuroprotective effect of Epo is ongoing through 2022.

Another recent development reported in 2017 is the use of wavelet analysis to identify which newborns should be treated for asphyxia and how well a treatment is working. Wavelet analysis is a statistical technique that has traditionally been used by meteorologists to predict long-term weather patterns. In the medical setting, wavelet analysis is being applied to correlate two types of data on a baby’s brain: blood flow and neuronal activity. The output is a new measure of brain health called neurovascular coupling. A higher level of neurovascular coupling in a baby’s brain indicates that a treatment is working.

If your son or daughter was catastrophically injured during birth, you have up to eight years after the birth to file a medical malpractice claim. A knowledgeable Orland Park birth injury attorney can help you file a claim and obtain an appropriate financial settlement to fund the best possible care for your child. Call Schwartz Injury Law at 815-723-7300 or 708-888-2160 for a free consultation.