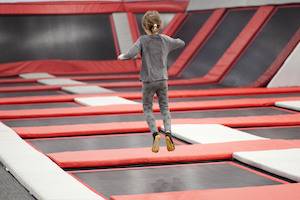 The combination of entertainment and fitness offered by indoor trampoline parks has led to rapid expansion of these types of businesses over the past decade. While these facilities are typically laden with foam padding to help prevent injuries, there is a risk of injury in any athletic activity. Trampoline parks generally require each participant (or a minor’s parent or guardian) to sign a liability waiver, indicating that they understand and accept the risk of injury and agree that the facility is not liable for injuries sustained while participating. However, there are cases where the trampoline park could be held liable for injuries under premises liability law.

Hundreds of trampoline parks now operate in the U.S., and many have creatively expanded their offerings to include climbing walls, augmented reality games, and physical challenges such as rope ladders and warp walls popularized by TV shows like American Ninja Warrior. Most of these activities have been carefully designed to minimize the chance of injury to participants. For example, trampoline springs should be covered by foam mats that are secured in place, and padded walls or nets can be used to prevent people from flying out of a trampoline enclosure. In addition, facility employees should monitor each area of the park and “blow the whistle” on any jumpers who are not following posted rules.

The most common trampoline injuries are sprains or strains incurred when jumpers land awkwardly. More serious injuries have also occurred, including leg fractures, traumatic brain injuries, and spinal cord injuries. In most cases, customers cannot recover financial compensation from the trampoline park because they were made aware of these risks and signed a liability waiver.

Premises liability law applies when an injury is caused by an unsafe condition that the facility owner/operator reasonably should have known about and remedied in some way (e.g., making repairs, blocking off an unsafe area, or posting signs warning that an area is unsafe and off-limits).

The exact wording of premises liability laws can vary by state. In Illinois, the Premises Liability Act (740 ILCS 130/) states that the owner or operator of a facility owes visitors a duty of “reasonable care under the circumstances regarding the state of the premises or acts done or omitted on them.” The law covers injuries resulting from actions and omissions by facility employees in addition to injuries caused by the physical condition of the facility.

Thus, if a trampoline park owner/operator is found to be negligent in their management of the facility, an injured person may be eligible for compensation even if they signed a liability waiver.

Trampoline park owner/operators may be found negligent, and injured persons awarded compensation, in cases such as these:

If you or a loved one have been seriously injured at a trampoline park or another type of amusement park, the facility’s lawyer or insurance company may try to deny your claim for compensation. A knowledgeable Orland Park premises liability attorney can best advise you about the validity of your claim and help you act quickly before the time limit on such claims expires. Call Schwartz Injury Law at 815-723-7300 or 708-888-2160 for a free consultation.