Posted on December 05, 2017 in Defective Products 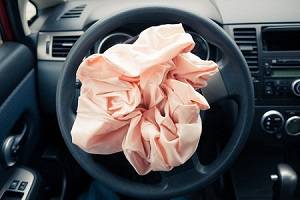 In what the NHTSA has called "the largest and most complex safety recall in U.S. history," approximately 46 million vehicles equipped with Takata airbags have been recalled. The airbags were found to have chemical defects that can cause them to explode and spray metal shrapnel onto passengers. The propellant in the air bags was found to break down when exposed to high temperatures and humidity. This causes the propellant to burn too quickly and results in increased pressure in the inflator, which can cause the inflator to explode.

The faulty airbags have injured nearly 200 people and killed 19. Takata airbags are in cars made by 19 different manufacturers. Some automakers, such as Tesla, Honda and Subaru, have been vigilant about getting news of the recall out to the public. They have contacted consumers by putting ads on social media and sending representatives door-to-door. Unfortunately, other automakers are not being as aggressive with their outreach. Of course, letting people know about the recall is only half the battle. It is sometimes difficult to get people to respond to recalls such as this because they do not think the problem is a big enough concern to actually take the car in to be fixed. The NHTSA and vehicle manufacturers are urging the public to get their defective airbags fixed as soon as possible. The repair is free for consumers.

Some experts, like David Friedman are concerned by how long this recall is taking.  He says, "Takata and the auto industry as a whole are not doing enough to protect consumers from deadly, defective airbags.... Some companies are not taking the issue seriously enough to even take basic steps that their marketing departments use every day to pull in customers." Only 43 percent, or 18.5 million, of the airbag inflators have been replaced so far. This means that there are millions more potentially deadly devices still being used.

Although auto manufactures have known about this problem for over a year, injuries and fatalities are continuing to mount. The most recent death attributed to the airbags happened when an individual was repairing their Honda Accord. It is not known what repair was being attempted but when the person repairing the car used a hammer, it activated the airbag inflator, which exploded. The individual died as a result of injuries the next day.

If you have been injured as a result of a defective automobile or auto part, you need to speak with an experienced Orland Park personal injury lawyer. Contact Schwartz Injury Law, to discuss your case and your available options today.